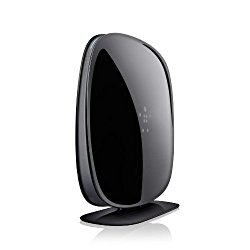 The Belkin N600 Wireless Dual-Band N+ Router is the fastest N600 router at long range versus other leading national brands.† The Belkin N600 DB Wireless Dual-Band N+ Router features advanced wireless performance for video streaming, online gaming, and other media-intensive applications. Belkin's exclusive MultiBeam technology minimizes dead spots and provides advanced coverage throughout your home, allowing you to stream HD video on more devices in more locations. The N600 DB can be installed in three easy steps, and preset security settings ensure that your network is safe as soon as it's up and running. With speeds of up to 300 Mbps + 300 Mbps, four Ethernet LAN ports, and one USB port, the N600 DB provides versatile, multi-device coverage. The router also comes with a suite of Belkin apps designed to enhance your wireless experience. † Results based on independent third-party testing. Visit belkin.com/router-speed for details. *The standard transmission rates—300Mbps (for 2.4GHz), 300Mbps (for 5GHz), 54Mbps, and 11Mbps—are the physical data rates. Actual data throughput will be lower and may depend on the mix of wireless products used.

We use cookies to give you the best experience on our website.I accept